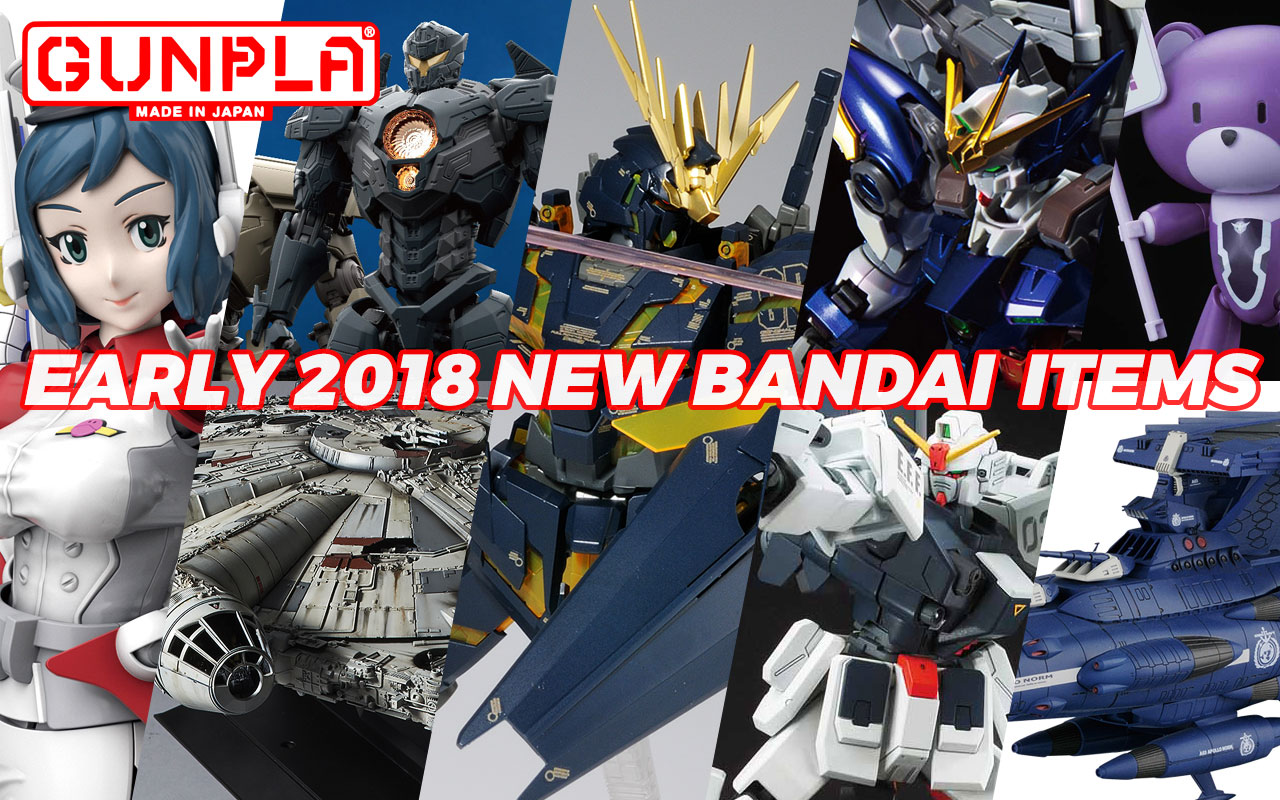 The rest of the early 2018 Bandai Hobby items have been officially announced--with one notable exception that we'll make sure to cover soon!

We know what you're all thinking, and yes, the MG Deep Striker is supposed to be coming in early 2018; honestly though, that thing is going to deserve its own post if what we've been seeing is true! In the meantime, here's all the remaining stuff that Bandai has OFFICIALLY announced for the first 1/4th of the new year!

The Banshee from "Gundam Unicorn" re-appears as a Ver.Ka model kit! This version replicates its appearance in the novel before being adapted into an animated work where it was a black and gold colored Gundam Unicorn with a different head crest. It can transform between Unicorn and NT-D Modes and includes Beam Magnum, 4 Beam Sabers, transforming shield, and bazooka. This special release comes with a large sheet of gold colored water slide decals.

If the Hi-Res Wing Zero Custom just wasn't shiny and fancy enough for you, then maybe THIS will do the trick! The kit is back again, but now there's a stunning pearl coat on the white parts and matte metallic finish on the blue, yellow, and red ones! On top of that, the brand new Action Base 4 is included for extra posing options! Aside from that, the release is the same as the original, with the pre-assembled inner frame and undergated parts that allow for a nub-free finished product; transformation into Neo Bird Mode is also still possible!

Part of a subline called GunPla'Cos Heroines, items feature GunPla based on characters from the Build Fighters series. Mrs. Loheng-Rinko is based Rinko Iori, the main character's mother in the first "Gundam Build Fighters" TV series. Her backpack equipment and battle attire is based on the Archangel from "Gundam SEED," recognizing a Gundam in-joke that Rinko Iori and Murrue Ramias, the captain of the Archangel, are voiced by the same actress! Mrs. Rinko can be posed in a seated position that resembles the Archangel, and the bottoms of Rinko's boots can deploy to form the Lohengrin cannons, which is also a play on words with Rinko's name! 2 Gottfried Mk 71 cannons can be mounted on knees and 2 beam rifles which can be handheld are included.

The remaining Gundam 00 character bears will all be joining us in the next couple months! Whether you're a big fan of Lockon, Alleluja, Tieria, or for some reason Graham Aker, you can pick your favorite or collect them all! All the bears include a sign and stickers so the bears can proudly display their pilot's favorite slogan.

One of the carriers created by the U.N.C.F. after the events of Space Battleship Yamato 2199 that features a dual wave motion cannon. Its large takeoff and landing area has been faithfully recreated and can be decorated with markings using the included waterslide decals. 2 same-scale models of the Cosmo Falcon and 4 Cosmo Tiger are included and can be displayed alongside it. Set includes a display base.