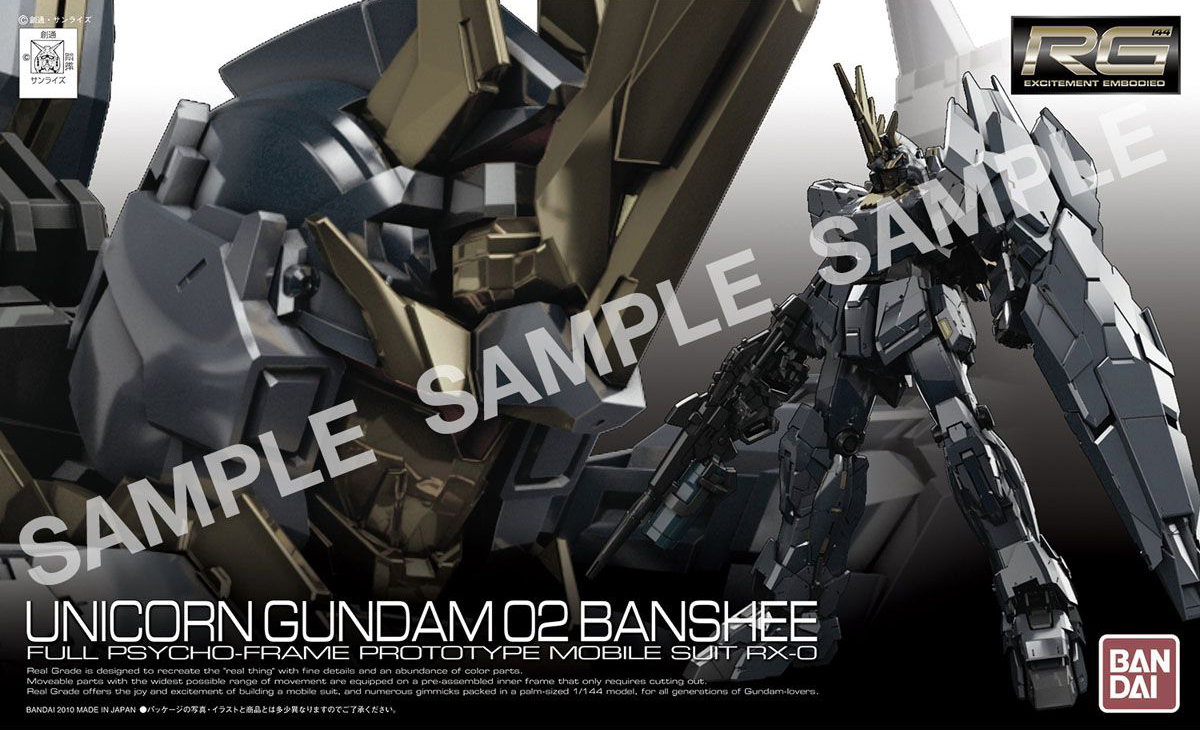 Want to see what Bandai has lined up for its second batch of early 2018 releases? We've got you covered!Here we go everyone, the first few months of 2018 are locked in for Bandai! Rounding out the early year releases are the final entry in the Blue Destiny revives (we know that's not what they're called but it's what they ARE), a new Build Fighters kit (and booster), and the RG Unicorn Gundam Banshee Norn--which is thankfully a standard release!

Also, of course literally the DAY that we stock all the preorder decals, 6 more decal sets go up for order. This set is very RG-centric, but there's a little something for everyone! Take a look at the related items below!

Following the groundbreaking release of the RG 1/144 Unicorn Gundam last year, its black unit 02, the Banshee Norn, is coming to the RG series! The advanced frame work unique to the RG series allows this kit to transform smoothly between its two modes and lock into place. This intricate “Lock Mechanism” secures parts of the kit during transformation and adds a high level of stability. A “Link Mechanism” has also been integrated into the MS joins to allow for less assembly steps while allowing smooth articulation. The Banshee’s iconic dark navy colors are expertly reproduced using colored plastic parts with different hues of navy for added depth. Its two types of Armed Armors and head units have been recreated with realistic detailing. Choose between one articulated or two fixed head unit antennas, the largest and most distinct feature of the Banshee Norn, all of which are included! The newly designed Armed Armor XC integrates clear parts into sections of the Psycho-Frame, which are revealed when the kit is transformed into Destroy Mode. The Armed Armor DE also has newly designed parts including lock mechanisms into sections of the unfolding unit to add stability during Unicorn Mode. Included with this kit are an array of weaponry! Equip the Banshee Norn’s Beam Jutte by replacing parts of the Revolving Launcher, which is attached to the Beam Magnum. The magazine can also be equipped to the rear armor.

All units unite! The “Blue Destiny Unit 3” finally joins Units 1 & 2 in the latest HG format! Now, you can finally recreate the battle of destiny between Yuu Kajima and Nimbus Schterzen by displaying it with the separately sold HG Blue Destiny Unit 2 “Exam”! Unit 3’s iconic shield and “Double Barrel beam Rifle” consist of newly assembled parts, which is used by the GM Dominance in Mobile Suit Gundam Side Story: The Blue Destiny. Using the included stickers you can even choose to recreate the “Exam System Activation Mode!” The wide range of articulation in this kit allow for poses that closely resemble the image of the MS featured in the series. Equip a variety of armaments for a great range of different action poses! Set includes Shield, 2 Beam Sabers, Double Barrel Beam Rifle, Space backpack, and 100mm (4 inch) Machine gun. Runner x9. Marking sticker x1. Foil sticker x1. Instruction manual x1.

The Build Strike’s final evolution has been revealed! The evolved form of the Build Strike, appearing in Battlogue Ep. 5, is a new Battle Strike born with an all new backpack and renewed body parts! The twelve wings can change into various shapes, giving the kit a style that resembles the “Star” and “Cosmos”. New parts are included that can be attached to upgrade the head, chest, shoulders, and leg units. Kit includes a Beam Rifle, Cosmos Shield, two Beam Sabers, and display base. Runner x9. Foil sticker sheet x1. Instruction manual x1.

Further customize your Gunpla with the backpack of the new Build Strike Galaxy Cosmos: The HGBC Galaxy Booster! Its twelve wings, which are the kit’s biggest feature, are individually articulated and can display a wide variety of silhouettes. The booster of the Build Strike Galaxy can be used in combination with various other model kits using the Striker Pack System. Set includes a display base. Runner x3. Foil sticker sheet x1. Instruction manual x1.

From the highly anticipated “Pacific Rim Uprising”, comes the film’s most iconic Jaegers in the plastic model kit form! Available for the first time to the HG product line-up, the Gipsy Avenger contains intricate detailing that has been faithfully recreated to resemble like that in the movie! These 6” (150mm) figures can achieve a wide range of motion and articulation that allows for dynamic poses to help you recreate your favorite scenes! The Gispy Avenger’s iconic “Chain Sword” and “Gravity Sling” weapons are also interchangeable. All details down to the highly detailed joint system and screen-accurate weaponry are represented. Imitate the Gipsy Avenger’s dual vortex turbines with the clear parts are used in the chest unit! It can be lit up using a separately sold LED Unit. Set includes Gravity Sling firing mode recreation parts x1, Plasma Caster firing more recreation parts x1, and Chain Sword 2.0 equipment recreation parts x1. Runner x4. Marking sticker sheet x1. Foil sticker sheet x1. Instruction Manual x1.

Being released to fight alongside the Gipsy Avenger is another hero in the new Jaeger fleet, Bracer Phoenix! Making its debut for the first time in the HG series, Bracer Phoenix will have multiple points of articulation and weapon parts! Bracer Phoenix’s Vortex cannon can be recreated to show off her firing mode! Alternate parts are included in this set and feature interchangeable chest pieces to build out the Vortex Cannon. An added Scrapper is also included. Set includes Vortex Cannon firing mode recreation parts x1 and Scrapper x1. Runner x4. Marking sticker sheet x1. Foil sticker sheet x1. Instruction manual x1.