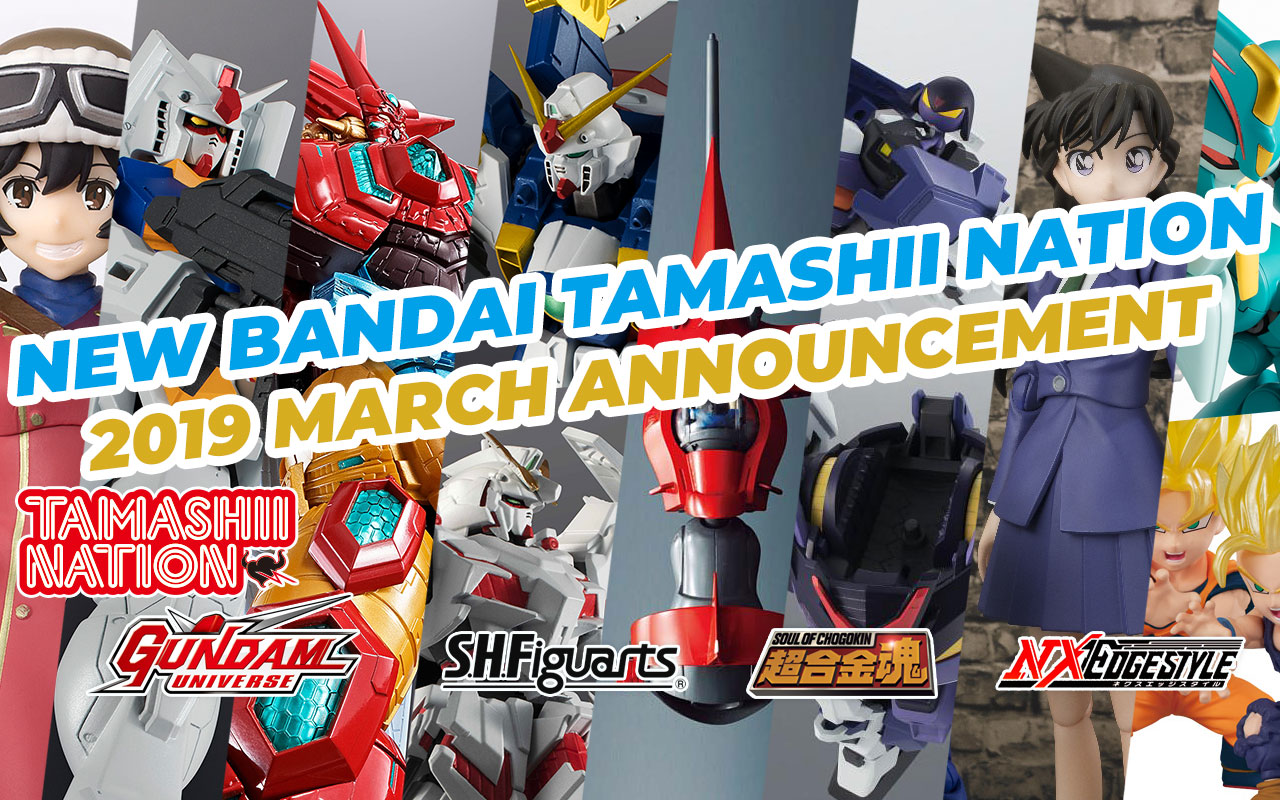 S.H.Figuarts Kylie from The Kotobuki Squadron in The Wilderness

Ran Mouri from DETECTIVE CONAN joins the S.H.Figuarts series, with all of the high detail and posability fans have come to expect. (The Conan Edogawa figure shown is sold separately.) The set includes the figure, two optional face expression parts, and two pairs of optional hands.

This is one action figure Getter Robo fans will not want to miss! The Getter Robo’s ultimate form, GETTER EMPEROR finally joins the Soul of Chogokin line. Each Getter Machine combines to make the final evolution form. A weapon, two pairs of optional hands, stage and a pole is included in the set.

The long-awaited debut of MOBILE SUIT GUNDAM 0083 in the popular ROBOT SPIRITS ver A.N.I.M.E. line! The first to get the treatment from the classic anime are the RX-78 GP01 and RX-78 GP02A. In the OVA series, these top-secret Earth Federation prototypes represented potential successors to the venerable RX-78 Gundam. The versatile and maneuverable GP01 faced off against the powerfully armed GP02 after it was stolen by renegade Zeon forces. The ver A.N.I.M.E. Gundam GP01 features incredible posability that was engineered to let you capture classic poses while it holds its weapons. Dynamic fighting poses are made possible by multi-axis joints and hinged armor plating, which work in concert to make this a highly articulated figure. A variety of included accessories and effect parts let you re-create climactic battle scenes with the GP02, sold separately in August; some of the effects are interchangeable between the two. The Gundam GP01 set includes the figure, four pairs of optional hands, a hand storage deck, a beam rifle, a shield, a bullpup machine gun, two rifle cartridges, a beam rifle holder, a back attachment for the shield, two saber effects, a curved saber blade, a beam rifle effect set, a beam shooting effect, sword-crossing effect, and two Vernier effects.

From the latest installment in the SGT. FROG series, serialized in Monthly Shonen Ace magazine, comes Garuru's "Spark Jagama!" Featuring a long rifle for super-sniping power, it's one of the most devastating weapons in the Keron arsenal. Even better: it transforms! The figure can be displayed in Normal Mode or in battle-ready Dangerous Mode. You can also use parts from Dangerous Mode to dock with the flying saucer accessory for a special custom feature. The set includes the Spark Jagama, a Garuru figure, a flying saucer, a long rifle, two command knives, two missile pods, two shield wings, two claw stabilizers, two thrusters, and two types of universal connectors.

From MASHIN HERO WATARU comes Genjinmaru! It's rendered in exquisite detail, with all of the character's trademark weaponry from swords to shuriken stars, all of which it can hold in its hands. Highly posable for dynamic action scenes, such as swinging its sword down from above, this is the definitive portrayal of the classic character! The set includes the figure, a pair of optional hands, shuriken, sword, and a stage.

The nightmarish Gundam GP02a, stolen at the beginning of the MOBILE SUIT GUNDAM 0083 OVA, joins the ROBOT SPIRITS ver A.N.I.M.E. line! In the story, this nuclear Gundam was created in violation of the Antarctic Treaty, and is sheathed in heavy armor to protect it from the atomic blasts it unleashes at its targets. Stolen by the renegade Deals Fleet, it is a formidable opponent for the Gundam GP01 throughout the series. This ver A.N.I.M.E. portrayal was created in exacting detail, designed to capture its enormous, heavy appearance while allowing stable posing. The arms feature multi-axis joints for enhanced articulation, including posable shoulder binders, while the legs are highly posable even beneath their chunky armor plating. The trademark atomic bazooka can be displayed stored inside the massive shield or deployed for action in a process replicating what's seen on-screen. The sabers include both normal and high-output types with straight and curved blades, and the grips can be stored on the waist. Display it with the GP01 (sold separately in July) to re-create dynamic battle scenes! The set includes the figure, four pairs of optional hands, a hand storage deck, a shield, an atomic bazooka, two saber effects, a curved saber blade, a high output saber effect, and two Vernier effects.