Hundreds of years of human colonization of space have finally resulted in a period of lasting peace. However, fourteen years ago, a mysterious foe, the UE (Unknown Enemy), suddenly appeared. Since then, this cruel yet mysterious enemy has destroyed space colonies, and routinely attacked other targets. A victim of their attack of the space colony Ovan, Flit Asuno was given a family heirloom by his dying mother, the AGE Device memory unit, which contained plans for a mobile suit. In hope of protecting others from the tragedy that had befallen him, Flit began to develop this suit with the help of the Earth Federation in the space colony Nora, and named this suit "Gundam" after the legendary suit developed by his family many years ago. It is now the year A.G. (Advanced Generation) 115. When the UE suddenly attacks Nora, Flit must pilot the Gundam to fight against the UE, thus beginning the Asuno family's century-long battle to protect humanity from the invaders.

Kingsley Lin has this! 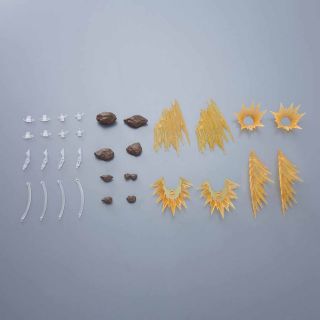 Figure-rise Blast Wave Effect (Yellow) You have this? Share your review!
Great details! - This really makes the kit pop out! Adds another dimension to the display!
Popular Now