During the One Year War of U.C. 0079, the Earth Federation's "Moore Brotherhood" and the Principality of Zeon's "Living Dead Division" engage in a fierce battle at the "Thunderbolt Sector", a shoal zone in the former Colony Side 4 "Moore". After successfully infiltrating Zeon's sniper field, ace Federation pilot and jazz enthusiast Io Fleming is given control of the latest Gundam prototype. To combat the new Federation threat, Zeon amputee pilot and ace sniper Daryl Lorenz sacrifices his humanity to directly interface with an experimental Zaku II unit.

Alexa Bell has this! 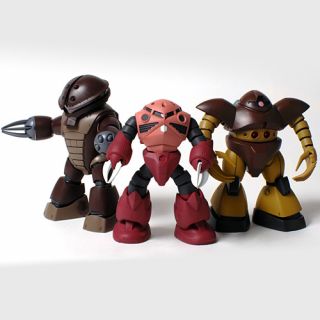 HGUC Amphibious Mobile Suits Set -Operation Capture of Jaburo- You have this? Share your review!
Great set! - This was an awesome set. Definitely worth the bundle!
Popular Now