The Revolution Has Begun! Mankind has moved into space. Thousands of people live on giant orbiting space colonies called "Sides." However, the Earth Government, which rules the colonies, is unjust and cruel. A group of revolutionaires builds five robotic weapons called Gundams and plans to send them to Earth to begin their fight for independence. Piloted by five young men, these of freedom of the colonists with them as they descend to Earth to begin Operation Meteor!

Steven Ellett has this! 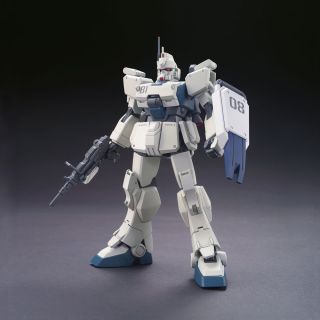 HGUC RX-79G Ez-8 Gundam Ez8 You have this? Share your review!
Best Gundam Fight Ever! - Spoilers for anyone who hasn't seen 08th team, but the fight between this and the Gouf Custom is just the greatest 1v1 fight in gundam - no newtype stuff, just 2 giant robots fighting to the death GLORIOUS... as such i was inspire to get this and i must say it didn't disappoint as a kit
Popular Now