In a distant future, a devastating war once ravaged the land of Mirsha to ruins. As when the land is about to recover from the devastation, the mobile citizens all encountered an mysterious virus called the "Etiolation Trinity", which an epidemic broke out and caused them to become mindless monsters called Bugs. Due to the fears of the virus, mobile citizens now live in three areas, each cities all sealed up in walls and pray that the Trinity, a mysterious energy can save them. But behind one of the walls, Lord Dong Zhuo Providence of Luoyang has been acting in an outrageous manner since the passing of the previous lord. In order to liberate the citizens from the Etiolation Trinity, a valiant hero named Liu Bei Unicorn Gundam steps up alongside Guan Yu Nu Gundam and Zhang Fei God Gundam to bring a new change to the world. 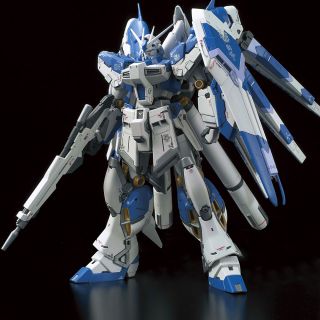 RG RX-93-2 Hi-Nu Gundam You have this? Share your review!
Loved it - This RG was a Fun build plus always loved the Hi-Nu Gundam
Popular Now