With this product, you earn 700 GP points.

4  comments + Add your connection
You've heard of "Version 2.0," "Revive," and "Ver.RM," so now it's time for another word for the same thing: CONCEPT 2. Where will this quest to capture the elusive essence of re-imagining an existing design end? Probably could have ended with "Version 2.0."

Anyway! Back when the original Metal Build Freedom Gundam came out, Bandai was simply translating the existing mobile suit design into the highest-quality diecast product possible. Over time, the Metal Build line shifted to incorporate incredible redesigns of the mobile suits that changed everything from body proportions to tiny markings. This figure brings the classic Freedom Gundam design into the modern Metal Build world that was started with Destiny Gundam! It incorporates the same backpack mechanism as the Metal Build Strike Freedom Gundam for dynamic wing poses, and each accessory has been made from the ground up to allow for the full range of functionality that the "real thing" would have. Don't miss out on the next evolution of the Metal Build line! 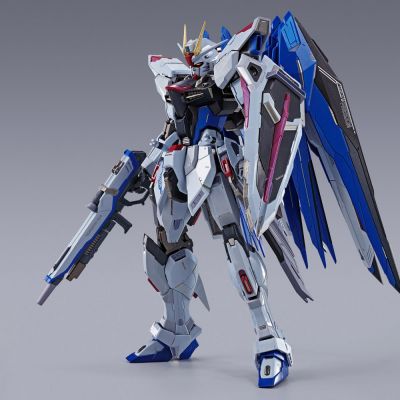