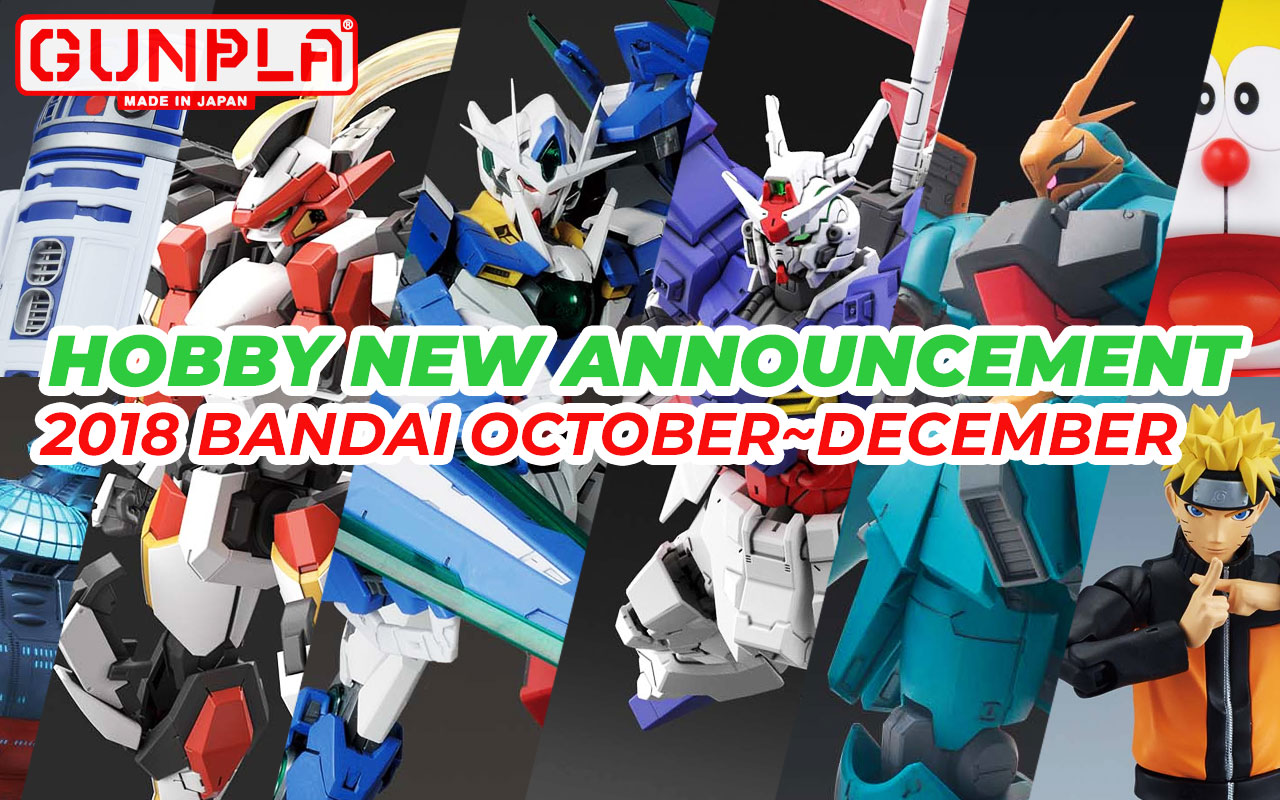 Take a look at the great model kits from BANDAI is rolling out in October ~ December 2018!

The "forbidden side of the Universal Century" that leads to "Mobile Suit Gundam: Char's Counterattack" is coming to the HG series line-up! Based on a story concept that led to the creation of the hit series "Gundam Unicorn", "Mobile Suit Moon Gundam" is being written by writer Harutoshi Fukui, with mechanical design by Ippei Gyobu who did a number of "Gundam Iron-Blooded Orphans" and "Reconguista in G" mobile suits. The Moon Gundam, a suit that was part of the development lineage to the infamous Sazabi is fully represented with its moon shaped Psycho Plate. The Psycho Plate can be unfurled by unfolding the backpack arm and can be separated as well as combined with the mobile suit. Articulation gimmicks in the knee showcase immense mechanical detail. Set includes a Beam Tomahawk, Beam rifle, Psycho Plate, Butterfly Edge x2, and display base. Runner x18. Instruction manual x1.

he movie "Mobile Suit Gundam Char's Counterattack" celebrates its 30th anniversary with the release of Gyunei Guss' Jagd Doga to the RE/100 series for the first time! Its unique design allows this model kit to be displayed alongside other "Char's Counterattack" MG series kits sold separately, such as the Nu Gundam Ver. Ka, Sazabi Ver. Ka, MG Geara Doga and Jegan. While having proportions faithful to the image of the MS in the file, intricate details have been added to create a dense design. A clear arm is used to display all 6 unfolded tunnels in the back of the MS and other gimmicks in the thrusters and funnels are also included. Superior color division as shown by Bandai's use of proprietary color injected plastic, allow red sections (such as the shield, sub-thrusters, and the inside of each of the verniers) to be recreated by simply assembling the kit without the use of paint. Set includes a Beam assault rifle, Beam saber, funnels x6, shield, and funnel display arms x6. Runner x16. Marking sticker sheet x1. Foil sticker sheet x1. Instruction manual x1.

The latest addition to the Figure-rise Standard series will be featuring the fan-favorite character Uzumaki Naruto! Superior tooling in the joints of this kit allow you to achieve various action poses and signature attacks such as "Rasen Gan", "Rasen Shuriken", and "Shadow Clone Jutsu"! Clear chakra effect parts are included along with a designated joint that can be used to support the kit to recreate iconic scenes from the anime. Additionally, this is the first model kit from Bandai Hobby to feature built-in magnets allowing this kit to be displayed by sticking it on walls – just like a ninja! With the use of color division in the parts you can recreate two facial expressions including a "posed look" and "smiling face". Set includes Chakra effects (with magnets) x2, Jutsu effects x1 set, hand parts x6 (clenched left and right, hand seal left and right, and open left and right hands), and display base. Runner x7, stickers, instruction manual.

The "Ganso" (Original) Doraemon will join the Figure-rise Mechanics line on his birthday, September 3rd! His yellow body colors have been recreated with colored parts, and the ears unique to the "Ganso" Doraemon have been recreated with newly designed parts. The included Hopter that can be attached to "Ganso" Doraemon's head is compatible with both this kit and the previously released Figure-rise Mechanics Doraemon. New tooling in Doraemon's mouth have made it possible to recreate his wide-opened smile without the use of stickers for even easier assembly! Clear exterior parts are also included to reveal Doraemon's inner mechanics. Set includes Clear Exterior set x1 and Take-copter parts for Doraemon set x1. Runner x9 Instruction manual x1.