With this product, you earn 200 GP points.

26  comments + Add your connection
A KOTOBUKIYA Japanese import! Neon Genesis Evangelion continues to be one of the most enduring anime franchises in history with some of the most beloved characters of all time... not least of which are the incredible giant robots known as Evas. Following up on the latest version of the Test Type 01 is the next intricate plastic model kit from the series, EVANGELION NO. 13 GIJISHINKA3! Appearing as a tall, lanky cyborg machine resembling the Unit-01, GijiShinka3 is the awakened form of Evangelion No. 13. It has a similar humanoid body with thin limbs, reinforced knees and chest, shoulder extensions, and horned head, but it adds to the alien look with four arms and a shocking white and black color scheme with some subtle red and green accents! The model kit is comprised of over 400 pre-colored parts so no painting is required, and it has an amazing 60 points of articulation for extreme poseability. Giji-Shinka3 also comes with multiple interchangeable hand, weapon, and accessory parts including halos, tendrils, spears, and more. Sculpted by Yuichi Kuwamura and Shohei Chiba, Evangelion No. 13 Giji-Shinka3 stands 7 ½ inches tall (1/400 scale). Display it by itself or with other Evangelion-inspired plastic model kits from Kotobukiya! 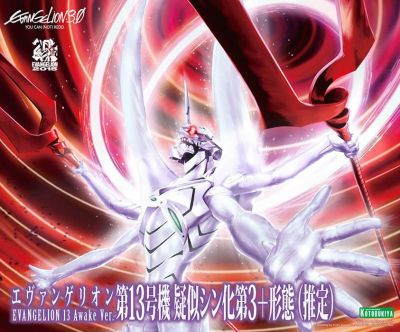 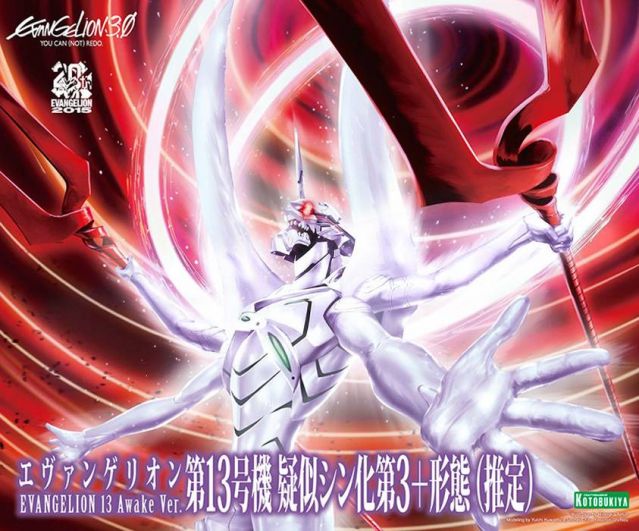