The year is Correct Century 2345. The civilization of Earth is at about the level it was during World War I. Long ago, humanity traveled through space, but the people of Earth have long forgotten about that. However, an advanced civilization still exists in cities on the moon, and now this Moonrace, in desperate need of resources, sets its sights back on its home planet. Three Moonrace teenagers, Loran Cehack, Keith Laijie, and Fran Doll, are sent to make sure that a return is even feasible, and are followed two years later by the invading Dianna Counter forces. Now, five thousand years after humanity first traveled into space, a new war is brewing between the Earthlings defending their homes, the Moonrace looking to settle on Earth, and other members of the Moonrace who believe a return to Earth may revive a nightmare from humanity's forgotten past. 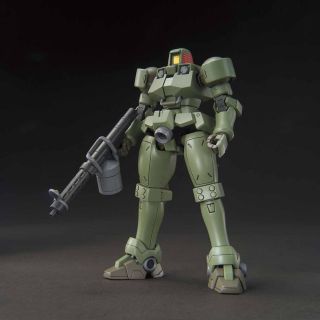 HGAC OZ-06MS Leo You have this? Share your review!
I get blown up. A lot. Like a lot a lot. - My favorite mass-produced mobile suit. Easy build. Fun as well. Lots of poses. Love how the beam sabers are stored in the shield. Cannon fodder never looked so good.
Popular Now